The best thing about Crwth Press is our authors. They’re all wonderfully supportive of each other; they promote each other’s work and even write reviews for each other. Today’s post is an example of this; it’s guest blogged by a new addition to the author list, Melanie Jackson.

Go tell the Spartans, thou who passest by,
That here, obedient to their laws, we lie.
—Simonides

There’s something about a bookworm that sizzles a bully’s antennae. Bullies want full fearful obeisance from those around them. But for any kid who loves to read, a good story will always out-fascinate a bore—which bullies tend to be. I relate this from personal middle-school experience, when my bespectacled face glued to books infuriated a skinny, whey-faced classmate into threatening me with assault. 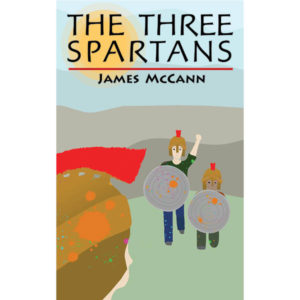 I was reminded of this episode while reading James McCann’s invigorating new middle-grade novel The Three Spartans. James ingeniously explores the dynamic of bookish kids versus bullies in a contemporary spirited retelling of the Battle of Thermopylae (480 BC). That’s the one where 300 Spartans held off a million (the number varies depending on the source) invading Persians in a narrow mountain pass.

The Greek poet Simonides of Ceos helped immortalize the doomed but triumphant Spartans. My mother, a shining-eyed reader of history, taught me Simonides’s line, and also about the valiant Spartan king, Leonidas. On hearing the Persians’ demand to surrender arms, Leonidas taunted, “Come and get them!”

Inspiring stuff for any reader, and just the right medicine if you’re being bullied. In The Three Spartans, James ingeniously devises a scenario in which some determined but scared (fear being the necessary kick-starter of bravery) kids decide to stand up to bullies one summer in Birch Bay, Washington. The leaders include Lea (for Leonidas) and Zeke (for Xerxes, the king of Persia). As for weapons, paintballs and garbage-can lids sub for spears and shields.

Best of all, besides being exciting, The Three Spartans is hilarious, as you’d expect when ancient, vicious ordnance gets updated to attacks-by-paint. And while kids will admire a brave hero like Leonidas, like I did, they can’t personally identify with him. But they will identify with awkward protagonist Arthur, who ingloriously pukes in places of great height like the top of water rides. (I’m guessing Arthur is James’s tribute to Artemisium, site of a concurrent naval Spartan victory over the Persians.) 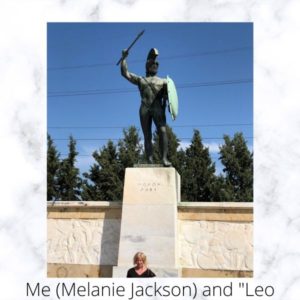 Instead of a mountain pass, there’s a tree house. Arthur takes on Zeke & co. with “We challenge you to a game of paintball—at the tree house. You have to take that tree house from us by the end of the weekend. Winner takes the water park—and this beach!”

As fate would have it (and the Greeks were diehard believers in fate), I visited Thermopylae in September, barely a month before I read The Three Spartans. I also visited the site of the Oracle, who in ancient times gave out wise if mystifying predictions.

Which leads me to yet another delightful scene from James’s clever novel. Lea and Arthur listen to, yes, an oracle. It’s a—wait for it—playlist Arthur’s dad has on Spotify called The Oracle, with songs “about standing up for who you are and what you believe.”

James, you are just too clever. I loved your book. What a treat—for all ages.

Melanie Jackson is feeling very up-tempo about being the author of The Fifth Beethoven, a  novel for young people to be published by Crwth Press in fall 2020.